In this article, I'm going to show you a Simple Three Step Facebook Ad Creative Process that Includes common mistakes to avoid.

So you'll know exactly how to convert clicks into conversions.

Platforms like Google or Bing are more geared towards a search intent such as where to buy something or how to fix something.

Instead, people on Facebook, are scrolling talking to their friends and family, and when you're advertising on Facebook you're interrupting them with interruption marketing.

So your creative is a key part of trying to look like a social post rather than an ad.

So first you should dig deep into your customer's minds and understand what would be a scroll stopper that gets your prospect's attention.

And before you can come up with this, you want to already know your perfect avatar.

So what kind of creative can you use

The kind of creative you should use depends on who you're running your ads to and what you're offering, each of these will be different for everyone...

But here are a few examples: 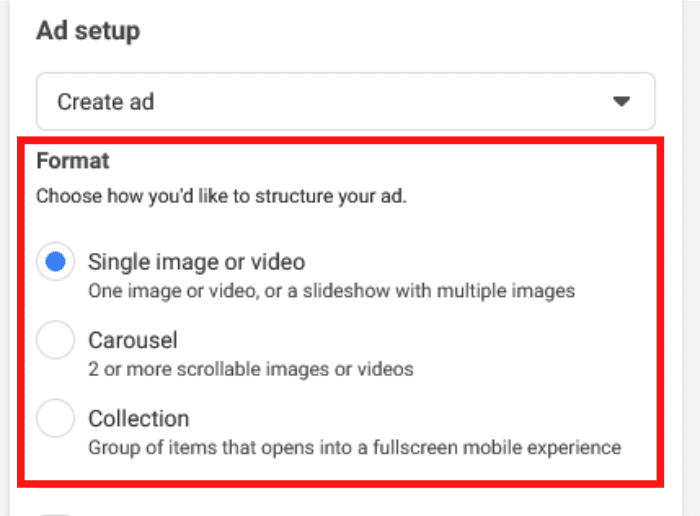 What I use and find the most important is image and video.

So which is the best to use

There isn't a best creative, the goal isn’t to just use images or video. Instead, the goal should be about getting as many images and videos out and testing and finding which works best for your business.

There is no right or wrong style of creative, it’s all about what your audience will be attracted to the most and testing with many variations is the key.

And if you think about this…

Some people will only skim-read your copy, others prefer to watch videos and some like to look at images and then go back to reading the copy.

It’s very different for everyone and that’s why you don’t want to get caught up in thinking about which is best.

So saying that let’s get into the 3-step process…

Step 1: First is to go to ads library

You want to collect as much information as you can on ads that are working in your industry.

If you go to the top of the ad it will show you the date and the longer that ad has been running it will give you an idea of how well it’s doing.

Now the goal here isn’t to steal or take, it's to collect ideas in your mind and collect as much info as possible, using the ads library is probably one of the most powerful marketing tools available.

It can show you exactly what ads your competitors are using including other industries for gathering different ideas.

When you are searching for ads, create a swipe file and put the ads into it, and focus on the angle of the copy and how are they visually representing the angle.

This should give you enough information to know what's working with your audience.

Step 2: brainstorming how to visually represent your hook

You then go to the hook and brainstorm ideas on how you can visually portray the message.

Sounds a little crude but does the job.

They could show a video demonstrating life stressors and feeling tired until finally they put the headphones on and they're taken to a place of serenity.

But one brilliant example of showing a brand hook and visually expressing its product is the dollar shave club.

You can check that video out if you haven’t already, but the way they represented their hook in the video was a brilliant creative way that went viral.

Now here’s something you should know…

That is what you shouldn’t do, which is to use random cat videos to grab someone’s attention.

This today just doesn’t work like it use to years ago, you want to make sure everything relates back to the hook idea.

And another point to make with your creative is don’t make it look like an ad, the idea is to make sure your creative looks like a post a friend or family would post.

This makes them stop to take a look, basically, It’s an ad that’s disguised as a post.

At the end of the day, you don't know what’ll work no matter how much thought you put into the creative.

The only true way to determine this is to get it out as fast as you can to the marketplace and to test it.

Your prospects will tell you what works and what doesn’t.

Here’s a strategy you can use for testing.

Create separate campaigns with the same hooks, and test the images and video separately and if you have multiple hooks you want to do the same with those as well.

This will give you results fast and give you the data back to know what works for your business.

You can then take the next hook and do the exact same with multiple styles of creative.

And perhaps best of all…

Because People react differently to each ad creative, by adding multiple styles it allows you to broaden your audience and get more people through the door.

Take your Facebook ad creative to the next level

As mentioned testing variations is a key part of making successful ad creative, what will also help take your Facebook ads to the next level including creative is knowing the right way to do copywriting research.