The Truth About How To Test Facebook Ad Creative

In this article, I’m going to show you How to test Facebook ad creative using a process I personally use to test multiple ad creative campaigns.

Specifically, I’m going to show you everything you’ll need to know so you can go with confidence when creating your very own test campaigns for ad creative.

This is done by using the right ad strategy to seperate testing your image and videos from your ads copy so you can isolate and test the ads creative.

It’s the visual representation of the hook or angle in your copy and it's contained at the AD Level.

One of the things they’ll see after your copy is the image or video that grabs their attention.

And getting the right image or video is essentially one of the keys to getting the highest conversion rate for your ad.

So let’s start with getting into the frameworks…

Because before you start testing for ad creative, always make sure you have a Facebook testing framework.

In a way that doesn’t conflict with the current winning campaigns that you're running or even mixed with other campaigns such as if you’re retargeting.

However, When testing ad creative here’s a quick framework you can use:

Which is to make sure to separate this campaign into the testing phase to isolate all testing campaigns.

Because if you don’t, it can potentially bring down the performance of winning campaigns, it can mess your data up, And will be difficult to track

So to create the best framework…keep it separate and secondly, it’ll depend on your Budget.

So a unique structure I created is called BCT or Budget Creative Testing. 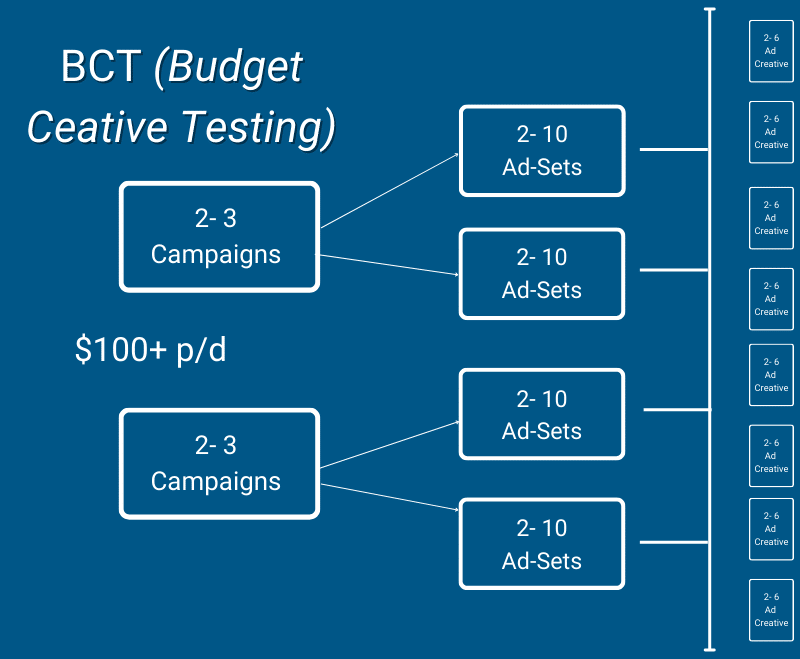 Basically, If you have a budget of more than 100 dollars a day or more, you can use:

You Don’t want to have more than 6 ad creatives within an ad set.

Too many ads jam the algorithm and can mess up your results, so don’t overdo the amount of creative testing.

And if you're running less than 50 dollars a day then the number of creatives you can test will be limited.

So optimise using BCT(budget creative testing) which will look like this:

Make sure you distribute your ad spend as efficiently as possible.

Within these creative testing frameworks, you want to make sure all your angles and copy remain the same because all you are testing, is ONLY the creative and nothing else.

If you make any other changes you won’t really know what’s worked.

So how should you set up the Budget in Facebook?

Now when testing I recommend you DO NOT use CBO.

you want to make sure you have full control of the costs, and how you distribute your ad spend.

So make sure to Set your budget at the ad set level or ABO.

And later when you start finding winning campaigns you can start using CBO.

What should you do after your test launch?

After you’ve set everything up, all you have to do at this point is wait.

Wait at least three to four days before checking the data let your budget spend across your ad sets before doing anything.

I personally leave my ads to run for at least 7 days or until it reaches the goal of my AOV.

What to do with the Results after you’ve waited?

If you find you have winning creative, the number one thing to do is to LEAVE IT ALONE!

Don’t touch the ad set let it run, any changes could potentially mess it up.

Just leave it, and as times goes by it will most likely start to dwindle.

And when it does dwindle, what you want to do here, is turn off the ad creatives that are still on at the AD level within your ad set.

And let all your ad spend go to the best performer.

I scale this without touching the original campaign.

I take that winning ad creative and duplicate it at either the ad set level, Or duplicate the campaign and remove all the losers within the ad sets of that campaign.

I then start with a higher budget around 50% or even doubling it and let that run.

And if you have ads that aren’t performing, all you do is simply shut them off.

What Metrics should you focus on for winning creatives?

I personally only focus on three numbers.

I don’t want to clog my data or get messy, I’ve always found simplicity always wins.

So ONLY focus on the numbers that move your business forward.

Such as your Cost per Acquisition which means how much it costs to acquire a customer.

An AOV (average order value) means if you have multiple products within your funnel whats the average purchase price across all products?

And finally the key metric is cost per leads.

How much is it costing you to acquire a lead if you’re running lead ads?

But in all honesty, even if I’m running ads for leads I still focus on the end result of CPA.

I’m all about avoiding overthinking and over complicating, don’t spend too much time figuring this out.

I've run campaigns where I literally took 10 different random pictures and threw them up quickly, and got really good results.

Because ultimately you’ll never know how the market responds and what you think is good might not be good for your audience.

So run with what you have found out how the market responds and do it FAST.

I personally would put my focus more on your angle and hooks and test your copy with minimal creative.

Running conversion campaigns and then later as you expand your budget then you can start optimising more to bring your ad cost down and get the best ROI.

If you’d like to know more about how to practically apply all of this I recommend looking into a Facebook ad creative process.

I also recommend learning more about Facebook ads targeting to further reduce ad spending and to find your ideal audience.