The Truth About How To Test Your Facebook Ads

In this article, I’m going to reveal The Truth About How To Test Your Facebook Ads.

Specifically showing you the right way to structure the creative, how to test the ad set audiences, and how many ads you should be doing within them.

Including what your test budget should be and bonus tips I have tried and tested over years of trial and error.

Testing is probably the most important part of advertising when running Facebook ads without this, you’ll spend a bunch of money and lose it fast and things can get messy.

But once you get this testing phase down correctly, everything from here is just about optimizing and scaling.

Now, in order to structure your testing campaign, you need to know what your overall budget will be.

How much can you afford to invest in advertising?

Because the more you can spread your interests out and test multiple creatives the faster your results.

You’ll also know which are the winners and losers in the shortest time possible.

I recommend starting from at least 50 dollars a day to spend over a 14 day period, if you have zero data and are testing your market to get sufficient data back.

However, if you already have a very good idea and have a strong process, then running each ad set for at least 4- 7 days or until you break even with your ad spend or even 2 times the amount of your CPA.

Although, if you’re on a low budget you can still do this with around 5 to 10 dollars a day, it will be a bit slower to figure things out but it can be done.

Now, what most marketers won't tell you when testing your ads…

Is that, most of your advertising budget, will get zapped up quickly if you don't have your message and offer down.

But ultimately will be worth the investment when you start to recoup the money from your winning ads, which lead to multiple back-end offers and making sure you scale your ads correctly.

How to structure a test campaign

So now we have the budget down let’s get into the structure of putting together your testing campaign.

Which is different from all other campaigns such as retargeting or scale campaigns.

So with that said here's a good structure to use.

Whilst trying to spread out as many of these audiences as possible, using 2 to 6 ads in each ad set testing at least 1 -3 copy variations with 1 or 2 creative. 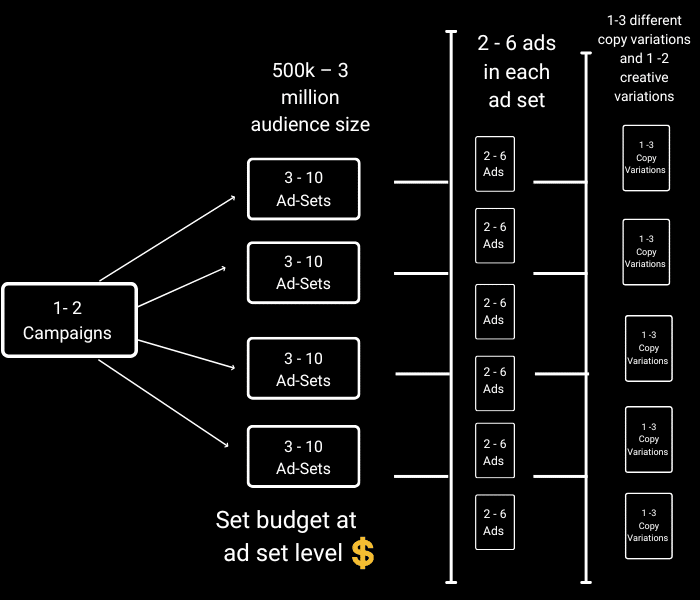 Now You can use different ad formats such as video, image, and carousels to help Figure out which will work best for your audience.

This will allow you to have control of the ad spend on each ad set that you test.

Which audiences should you use in the ad set level?

Interest audiences can have a very small number within them and what I suggest is that bundle them together.

So if you have multiple interests with less than 200k just combine a bunch of them together.

And with look-alike audiences, I usually separate these, or sometimes I bundle them together as well.

Some people will suggest you don’t bundle your lookalikes but I’m a geek when it comes to testing and I’ve found very good results doing both at times.

But ultimately what works for me will be different for anyone else and ultimately the key here is that you have to test to find what works best for you.

Creative testing:
The goal of testing Facebook creative is to visually represent your hook and angle in different ways using images, videos, and carousels.

You want to take the hook idea and test which visual representation best communicates your message to your best audience.

Using 1 or 2 hook creatives is enough to start with.

Because when you first begin testing a new campaign the truth is, you want to focus on the copy first.

Make sure your message, hook, and angle are compelling your audience to take an action.

Deciding which ads are winners and losers

You should never make a decision on which ads are winners or losers based on what you think is good or bad, ALWAYS use the data to make the decisions.

With the winners, if you’ve spent more than the break-even or even 2 times your cost per acquisition and still haven’t gotten any results, then turn them off.

Especially if the data suggests it just won't work, don’t spend more because facebook will unlikely get you a customer after this point.

If you get a sale and then go over two times the cost of your customers value and still haven’t got any other sales after that.

I would personally keep it going because Facebook ads can suddenly get customers out of the blue.

Because It all depends on your buyer's spending habits.

It could be near the end of the month when people get paid from work and start buying.

It could be a season when a lot of people are on holiday but when they get back to their usual routine they start spending.

Many times I've experienced my ads going past three times the limit and I get a bunch of sales in one single day, this can repeat so be wary of this.

Make sure to set up Google tag manager, I don’t ever trust the Facebook ads managers results.

It's never been accurate in the past, and it certainly isn’t accurate now.

You want to have some sort of third-party software but google tag manager does the job.

It’s what I use to analyze my data more accurately.

If Facebook doesn’t show you which ad set is getting the results or gives inaccurate data it can be difficult to figure out how your ads are actually performing.

For example:
I’ve had purchases showing or not being shown in Facebooks ad manager for some ad sets, but google analytics showed a completely different ad set.

This is why I wouldn’t trust the data on Facebooks platform.

I hate to overcomplicate and focus on every detail such as click through rate, cost per click, impressions, and so on.

My focus is always on the end result, which is the Cost Per customer or cost per lead.

If these numbers are doing well then let it run and don’t concern yourself with any other number.

3. Only change One variable at a time

If you change your copy and creative at the same time, how do you know what works?

This can be a common mistake a lot of beginner marketers make.

You need to only change one thing at a time and then wait to see the results with ads, the biggest change I focus on is the hooks and angles.

And now that you know how to test your ads, I highly recommend learn more about Facebook ads targeting.