In this article, I'm going to cover what Advantage Campaign Budget+ is and what type of budget optimization you should use.

According to Facebook's documentation the difference between CBO and this new advantage campaign budget as it states:

Where to set up and find advantage campaign budget+

Go to campaign setup and scroll down, and you will find Advantage Campaign Optimization + rather than having the old campaign budget optimization (CBO). 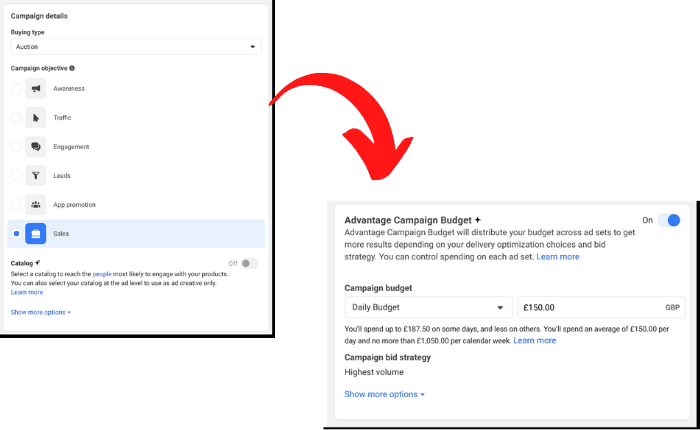 what i've noticed using it

As I’ve been running this optimization, I’ve not seen anything different from CBO, and if you’re familiar with the CBO Campaign you’ll know that it’s basically doing the same thing.

Distributing your ad spend across your best ad sets, so basically, there’s no difference!

But I think what’s happening here is that they want people to use CBO more than ABO and have changed the angle in a way that has more sizzle!

The word ADVANTAGE is a way of indirectly stating that it’s probably going to put you ahead in your advertising.

Now if you notice under the Advantage Campaign Budget, instead of using the old bid strategy of the default that use to say…

the lowest cost has changed to: Highest Volume or Value.

They're saying it in another way of getting the most from your budget.

Maybe this change is because it’s the way of stating the promise and claim which is more of a BIG promise and sounds more positive to the user.

It usually means because they want you to use it as you’ll put more money into it.

Because to be fair CBO does return very good results once it starts working well for you.

Should you use this Advantage Campaign Budgets over Ad set Budget optimization?

Whether you use advantage campaign budget over ad set budget optimization depends on where you are with your advertising.

If you're starting out or testing a product, service, or a new lead magnet then having full control over your ad spend will be a priority.

This is where Ad set budget optimization will be better because you can control the ad spend on each ad set and increase budgets where you want and switch off any that don't work.

However, if you have a winning offer and you have a funnel that’s converting then CBO or as they call it now Advantage Budget Optimization will be better.

As you can let Facebook allocate your budget across each ad set to find you the best results from each.

Especially if you're retargeting different audiences that may cause an overlap then the Advantage Campaign Optimization will be superior.

I also recommend looking into how to target with Facebook ads to further improve your results.